Someone requested that I post this ancient driver, which along with grabbing html tables can be used to send data to a website over URL GET.

No warranties, as usual.

The slides can be viewed here:

Script up your application with Lua! — RyanE — OpenWest 2014 from ryanerickson

The code sample is here: Lua_Openwest2014_RyanE.tar.gz

Here’s a driver I did a while ago, and while it isn’t more than one hack as of yet, it is a useful hack if you have Yale locks.

I use this driver to turn off auto-timeout when we’re going to be going in and out a lot, by toggling a button on a 3-button to red or off, and then setting auto-timeout.

It works fairly well, although I’ve seen the locks not pick up on it from time to time. 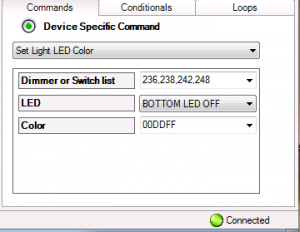 I’ve had a few requests for this driver lately, sorry I haven’t posted it before now.

This driver accepts connections on the main (master) controller on port 8080, and sets a variable with the sent command, and fires an event.

i.e. if you do a URL Get to the following address:

The Control4 ‘COMMAND’ variable will contain MYCOMMAND, and the ‘Command Received’ event will be fired.

In Control4 programming, you can program against the command name received in the COMMAND variable.

The driver can be found here:

I made this driver quite a while ago, but forgot to post it here. I was prompted to post it after a post on the external Control4 user forums (c4forums.com).

END_OF_DOCUMENT_TOKEN_TO_BE_REPLACED

By popular demand, here’s a driver that will fake a garage door hooked to a controller:

Have fun with that.

ETA: Commenter asked me to explain it a bit:

Control4’s Garage Door Sensor / Relay is a combination driver, that uses a relay to toggle a garage door, but shows the *contact*’s door state. One of our dealers wanted to show a garage door in his project that didn’t toggle immediately after you pressed it (like a relay would), so I created this driver.

Pretty simple stuff, and not that useful for anyone other than someone demoing Control4 without all the hardware.

Although I like Control4’s touchscreens, the Android app, and Control4’s SR-250 remote, sometimes when I want to adjust my office lights or turn on / off the office ceiling fan, I’d rather do that with a simple command-line application.

Since I typically have a terminal window or two open, I can quickly type ‘lights 20’ or ‘fan off’, much faster than I can start up the Control4 Android App, or find my SR-250.

To that end, a while back I created a small Lua script that does just that.

END_OF_DOCUMENT_TOKEN_TO_BE_REPLACED

One of my favorite features of the Control4 system is that you can have Control4 touchscreens display photos as a screen saver, after a user-configurable timeout.

The initial setup of Photo Screensaver requires that a Control4 installer setup the storage location (typically on a network attached drive, or a local USB drive).

Once it’s setup, the homeowner or other user can use ComposerME or ComposerHE to add / remove photos from the screensaver.

While Composer isn’t a bad tool for adding photos to the screensaver, it isn’t a great tool, either, as it’s not all that convenient, especially if you’re running OSX or Linux, like I do. 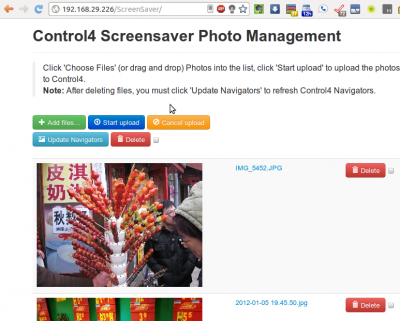